Story in the Tampa Tribune 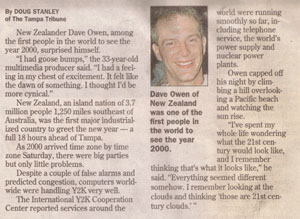 This story appeared on the front page of the Tampa Tribune New Year Edition, January 1st 2000.

Yes, I know the quotes in this article are a bit naff. Hey, I was caught up in the moment. Doug also used the usual reporter's licence to paraphrase heavily.

The Story in Full:

New Zealander Dave Owen, among the first people in the world to see the year 2000, surprised himself.

"I had goose bumps," the 33-year-old multimedia producer said. "I had a feeling in my chest of excitement. It felt like the dawn of something. I thought I'd be more cynical."

New Zealand, an island nation of 3.7 million people 1,250 miles southeast of Australia, was the first major industrialized country to greet the new year - a full 18 hours ahead of Tampa.

As 2000 arrived time zone by time zone Saturday, there were big parties but only little problems.

Despite a couple of false alarms and predicted congestion, computers worldwide were handling Y2K very well.

The International Y2K Cooperation Center reported services around the world were running smoothly so far, including telephone service, the world's power supply and nuclear power plants.

Owen capped off his night by climbing a hill overlooking a Pacific beach and watching the sun rise.

"I've spent my whole life wondering what the 21st century would look like, and I remember thinking that's what it looks like," he said. "Everything seemed different somehow. I remember looking at the clouds and thinking "those are 21st century clouds.' "