I woke up on the 31st December and leapt into action, which is unusual for me. I went to the TAB Trackside office and got everything ready for the New Year's Day show at Hastings.

Before going to Hastings, I stopped off at home and recorded a piece-to-camera for posterity. The idea was to record my feelings and impressions of life at the end of the 20th Century. It was completely unprepared and unrehearsed, and consequently unspectacular. Never mind, at least I tried.

On the way to Hastings, I lamented the fact that I hadn't made a better effort to be doing something momentous this evening. After looking forward to this for most of my life, it seemed like a total washout.

I picked up a couple of spunky young hitch-hikers on their way to Mahia. They were cool, and full of youthful excitement.

At Hastings, while setting up for the next day, the local TVNZ stringer introduced himself to me, and seemed surprised that I knew nothing of his plans to broadcast from our OB truck throughout the night. I was happy enough about that, and agreed to come down and help. They had two broadcasts to do - one at 0130 and one at 0730. The TVNZ presenter was Kerry-Anne Someone. I didn't recognise her, since I never really watch TV1, but apparently she's quite well-known.

Doug (from the Tampa Tribune) called me, and we chatted about the big night. He said he'd try to call me just after midnight to get my reaction, but I warned him that most of the world would be calling New Zealand and he'd be lucky to reach me. He also said that he'd like a photo of me at midnight to include with his story, if I could e-mail it to him overnight. Unfortunately, our digital camera was with Dad in Te Awamutu (getting photos for the Te Awamutu Online website), so I went into town and bought another one. This was a big expense for me, all in the name of grabbing some limelight.

When my partner Ange finally finished work at about 7:30pm, we met up with her friend Robyn and went into Hastings. They had street celebrations with various buskers and performances. It was good, but somehow lacking in atmosphere. After a while we went over to Napier. 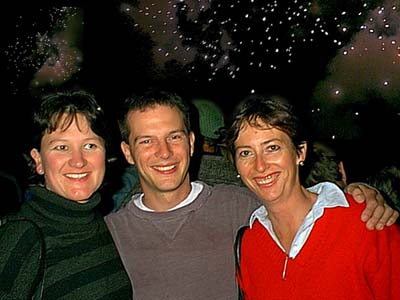 Napier was much better. There were thousands of people, all sorts of colourful sights and sounds, and a real feeling of something special about to happen. We wandered up and down Marine Parade and sunk a few beers. A live band entertained from a well-set-up stage, and finally counted us all down to the big moment. There were the obligatory cheers, singing, kissing and general merriment. A 20-minute fireworks display followed.

Most people headed away from Marine Parade after the display, and we did too. We drove back to Hastings, during which time I tried to contact a few people. As predicted, the phone lines were jammed and I had no luck.

At 0130, we met the TVNZ crew at the OB truck, and did a bit of editing before feeding their pictures to the world. I was a wee bit pissed, but still able to operate the equipment. I was absolutely stoked at being involved in the broadcast. While the pictures were being broadcast, I e-mailed the photo above to Doug.

We went back to Ange's cottage in the country at about 0230. We mucked around for a couple of hours, then figured we'd better get some sleep. Just as we were lying down, I changed my mind and decided that this night was too important to miss a single minute, and I went outside to wait for the sunrise. Good move. I wandered around the paddocks, taking in the view, and waiting. As the dawn approached, everything was quiet, except for a couple of distant roosters. In the distance, I could see a few vehicle headlights climbing the hills toward the peaks, searching for vantage points. 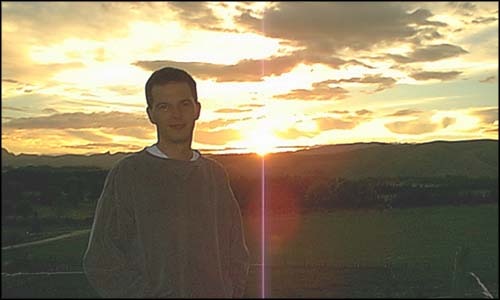 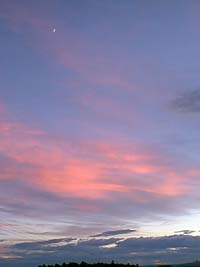 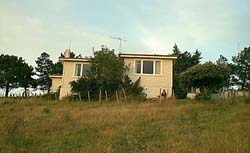 I woke Ange up, and we made ourselves a nice little spot to watch the sunrise. I had to convince her that it was a good idea to take some photos. It was awesome. The few clouds made it quite spectacular.

Down in the valley, an irrigation system was spraying water over some crops. A few farm noises drifted our way. It looked exactly the same as any other summer morning in rural New Zealand, but it felt different. I didn't have to convince myself at all -- everything I looked at seemed to be from a new era. It was everything I wanted it to be. 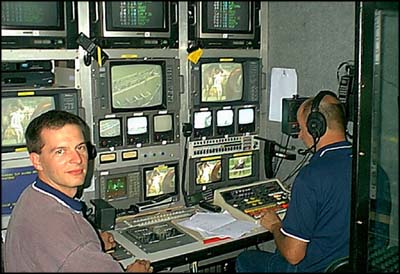 At 0730, I met the TVNZ guys again, and we did the next feed of pictures. Then it was into setting up for the Trackside show. It was a long day, and I struggled to stay awake at times. It reminded me that I'm not a teenager anymore, and sleepless nights take their toll on me now. Still, I had a good day with friends and colleagues.